If you want to feel a bit like Ripley on an alien planet without the pesky face huggers risk but with the protective clothing, bleak beautiful landscapes and howling wind may I suggest a short trip to Iceland in February.

For a sharp reminder that the entire country is basically a few volcanos linked by lava fields you should wrap up warm, dodge the thick slippy ice in the car park and head to the  Gunnuhver hot springs.  You stand on the wooden path, they’re very keen you don’t stray from this path what with the risk of falling in, and watch the sulphurous mud bubble away at really quite high temperatures indeed.  (Can you tell I’m not a REAL travel writer?  A real travel writer would pop downstairs to grab the guidebook in her handbag, pausing only to make another coffee all the better to give accurate information about temperatures and so on.  However, I am the girl who aged about 7 finished a short essay on fish with “That’s all I know about fish but if you want to know more I’m sure there are books you can read.”)

The whole place is a Geography teacher’s playground.  In fact we saw quite a few school trips and the teenagers were actually looking up from their smart phones as they experienced tectonic plates, thundering waterfalls, old geysers … all in the kind of scenery  you normally see on a screen at a multiplex in a film starring Tom Cruise being futuristic in a grey boiler suit.  (Oblivion? Yep – much of it filmed in Iceland.)  In fact, the geyser place (damn that guidebook being downstairs) has one that spouts every few minutes which is fun but not as fun as watching a coach load of tourists standing close to it, phones or iPads poised before there’s a collective groan of “Oh I missed it.” while those of us simply using our eyes store the view away in our brains and walk smugly past.

The best bit of the holiday was, for me, definitely the dog sledding.  It’s a close run thing between getting lost in Reykjavik (trans. Smoky Bay.  Can’t remember why – some bloke seeing it for the first time must have seen the hot springs in the distance.  Look don’t get cross I told you where the guidebook is.) on our first night and spinning a “Hostel” like story about how the very polite helpful chap who sent us in pretty much exactly the wrong direction from the hotel we named was actually a stooge in the kidnapping plot. “Yeah, I’ve got the empty pizza box and I’m ambling towards them now.  Get the windowless van ready.”  Blame the booze on the plane but I laughed helplessly if slightly nervously until we were safely back at the hotel.)

So, dog sledding.  It’s every bit as brilliant as you think holding on for dear life as a team of dogs expertly (with a teeny bit of ego based in-fighting) pull the sledge while your bestie and a bearded young man hang onto the back and he shouts “Yip yip yip yeeeeeeeee, Caesar CONCENTRATE” at the top of his voice.  Caesar was having a bit of a grumpy morning culminating in a bit of an impromptu “handbags at three paces” scrap with one of the lead dogs halfway through the trip.  It was all sorted in no time but my inner lyrics to that Christmas favourite will now be “Come on it’s lovely weather for a sleigh ri …..oh god, oh god, they’re killing each other, the noise, make the snarling and yelping STOP, his EAR is hanging off, oh no, it just looks worse than it is …de together with you. DingalingadingadingdongDING.” It’s an assault on all your senses.  The bright morning sun sparkling on the powdery snow, the tingling cold that gets through the thick thermal clothes and makes your face glow, the sound of paws padding and yes, murderous blood curdling snarls from time to time and the smell.  Dear me the SMELL! You see, especially on the first run of the day, your team of dogs like to mark their territory as well as leave a breadcrumb trail as it were in case there’s a snow storm and they need to find their way home.  Except they don’t leave breadcrumbs.  Well there might be breadcrumbs in there but …it’s mainly concentrated wee and steaming poo.  Lots of it.  If watching the back of harnessed dogs have a relay of “hang on a minute lads, it’s my turn …ooh that’s better.” then maybe the romance of dog sledding is not for you.  I found it reassuring and a bit comical.  Of course I fell in love with one of the big bruisers at the back of the pack whose job is to take most of the weight when you first set off.  You get the feeling unlike their ice blue eyed wolf like colleagues that they’re not the sharpest knives in the box but these cuddly brown eyed smily power houses are having great fun even with the permanent view of a close up dog’s bottom in their working day.

Anyway, here he is.  I forget his real slightly unpronounceable name but to me he is Puppyface McStinkybottom. 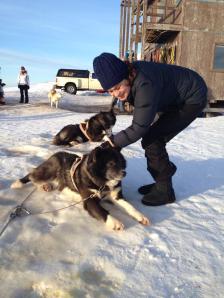 Now that I’m back I have my postponed PET scan on Monday.  This means we get a “marker” that will show if there’s any progress in the growth of the cancer cells in my lymph system.  If the nodes in my neck are anything to go by then I’d say by the scientific method of me giving them a prod there isn’t much which would be y’know good and gives me plenty of time to tick more off my bucket list.

2 Responses to “That’s amazing. What is it?”